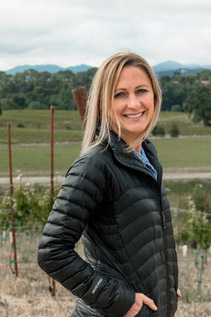 Brianne grew up in the small seaside hamlet of Pacific Grove, California where she worked at the well-known restaurant, Passionfish, as a teenager. There, she was exposed early to the world of wine, and quickly fell in love with its beauty, nuance and the harmony it provided to the restaurant’s cuisine. While deciding what to study in college, she realized wine encompassed many of her interests, including her appreciation for art and fascination with science combined with her love for food and travel, and exploring the outdoors. Brianne began her formal winemaking education as Cal Poly State University, where she earned a Bachelors Degree in Wine and Viticulture. In her 14 years in the winemaking industry, Brianne has chosen to work at several notable wineries including Two Hands in Australia, Duckhorn and Quintessa in the Napa Valley and Adelaida Cellars in Paso Robles. She currently holds the Associate Winemaker position with Rabble Wine Company in Paso Robles where she continues to expand her knowledge and expertise.  With each wine she makes she strives to honor the terroir from which the grapes are grown and to capture the essence of Central Coast sunshine, soil, and the uniqueness of each particular vintage.

On her days away from the winery, Brianne can be found at a local Farmers Market, cooking for friends, hiking up a mountain or enjoying some beach time with her husband Mike and their dog Gus.